I’m opinionated, and I feel quite passionately about several causes. With the Supreme Court ruling on marriage equality, I’ve experienced great joy this weekend. However, a few of my Facebook friends are opposed to equality for the LGBT community. I commented on one of these: 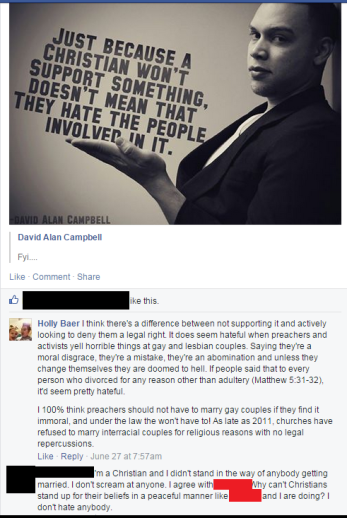 At first, I felt incredibly guilty. I wonder if I had pushed the line, if I had said something inappropriate and disrespectful. After some time in thought, I reached a new conclusion.

If someone said, “I don’t think women should vote. I’m not screaming at people, I don’t stop them from voting, but I think my God says that women shouldn’t vote,” we wouldn’t stand back and respect their intolerance. If someone said, “I just disagree with the mixing of the races. I don’t stop integration, I don’t block the campuses, but I think God never intended for the races to mix,” we wouldn’t just nod and accept it. We wouldn’t sit back and say, “Well, we’ll agree to disagree.”

“I don’t hate anybody.” I don’t doubt that the woman who replied to me truly believes that. If you think that LGBT people are condemned to hell, that isn’t love. If you “stand up for your beliefs” which ultimately encourage other people to go out and beat, kill, and utterly degrade LGBT individuals, that’s hate.

In these discussions, we non-believers don’t have to follow their rules anymore. We don’t have to back down the moment they mention beliefs. We can disregard scripture, and we don’t have to use their scripture against them—although I do enjoy doing that with my knowledge of the Bible and church history. We are no longer tied down to their rules of engagement.

Whatever religious practices are practiced behind closed doors, as long as they don’t cause physical or emotional harm, should not be interfered with. But the moment they bring those beliefs into the public sphere, they can be criticized. Those beliefs being religious don’t make them exempt.

Before I wrote this, I expressed my worry to a group of atheists I have come to respect. At the time, I was frustrated, emotionally drained, and I experienced a lot of self-doubt. They expressed many of the views I’ve written about, but I rebuffed them, wondering where respect should stop and end. Sleeping on this, thinking on this, I feel better and more secure in these opinions.

I no longer feel obligated to back down whenever they mention God as the source of belief. They’re allowed to have that belief, but if they can say nothing beyond “God says so,” it isn’t a real discussion. Real discussions have room for both sides to change their opinions. Real discussions don’t have an unofficial referee deciding the rules seemingly at random.

When people use religion as an excuse to oppose something, they are very often standing in the way of social justice. Religion was used to defend slavery, defend Jim Crow, defend their refusal to give women the right to vote, defend segregation. Many religious people also used their faith to oppose these injustices, and they shouldn’t be ignored, but that doesn’t remove the guilt from those who use their god to try and prevent others from having rights.

When people claim their religion is the source of all justice and all goodness in the world, they’ll be held to that standard. When the loudest mouths in their faith say they have moral superiority, but push down the poor, the weak, people most in need of defense, it shouldn’t be surprising when we lose respect for those people’s beliefs and the beliefs of that religion.

We don’t have to agree to disagree. We can stand up, speak out, and utterly disregard the argument: “God says so.”